Feel free to join the OpenDebate forums if you're in the mood to discuss virtually anything. People from all persuasions are welcome to join as long as they obey the terms of service. I shall add that the forum is not owned or operated by me.

First of all, I would very much like to thank 'Fraggle Rock' for bringing this article to my attention. Prussian Blue and their mother are, apparently, seeking more publicity by agreeing to participate in future interviews. Read on and enjoy!

THE teenage white supremacist twins, Lynx and Lamb Gaede, have gone into hiding after their controversial ABC special on Oct. 20 portrayed the blue-eyed Olsen lookalikes as racist ranters. But Teen People, edited by Lori Majewski, has apparently scored an exclusive interview with the controversial duet. The twins have a band called Prussian Blue, are popular at neo-Nazi events and have been praised by one-time Ku Klux Klan Grand Wizard David Duke. Lamb has been quoted as saying: "Men like Adolf Hitler and Rudolf Hess are our heroes."

It was a battle between the teen magazines, and at least one rival is claiming Teen People is bending some journalistic rules to reel in the 13-year-old twins. It seems Elle Girl, which is edited by Christina Kelly, was originally going to do the story. But at the last minute the girls backed out. Insiders there said they were informed by the twins' mom, April, that the girls were going with Teen People because the Time Inc.-owned monthly had agreed to let them vet the article before it ran. That would be a no-no at Time Inc., which owns Teen People. Objective reporters on mainstream magazines don't surrender editorial control to the subjects they are covering. Teen People's big sister, People, has been in a slugfest on just that topic with the new import OK!, which promises to give celebrities editorial control.

Jeremy Helligar, the deputy editor to Majewski at Teen People, insists that the magazine made no such promise. "Getting the story was a team effort," said Helligar. "We don't give editorial control, but I think people know we stand for fairness and accuracy."

He said that if the magazine was doing a first-person story, it would allow the subjects to have what he called a "readback." Helligar insisted the mag's only promise was "to portray them fairly and accurately."

But the Elle Girl insiders say they called back, and the twins are under the impression they're getting a prior-to-publication review of the article — with a chance to make corrections. The girls' father, Bill Gaede, who uses a swastika as a brand for his cattle, insisted in published reports that they are not spreading hate, but are only exercising their freedom of speech rights. "We must secure the existence of our people and our future for white children," Lamb Gaede told ABC's Cynthia McFadden on "Primetime."

In their recordings, the California-based twins urge: "Aryan man awake, how much more will you take, turn that fear to hate, Aryan man awake." Their appearance on the ABC special triggered widespread criticism. Their Q & A is expected to hit in the February issue of Teen People.

Click on this link to see some recent pictures of Prussian Blue, April, and Dresden. You will notice that April's choice of clothing looks very 'milkmaidlike', and her hair is no longer blonde. The first picture at the top of the page displays April standing with a so-called 'reporter' for the National Vanguard.

The quite unique domain name of www.AprilGaede.com has apparently been purchased by the creator(s) of the 'Movement Frauds Exposed' blog; therefore, you'll be directed to that particular blog if you ever decide to type www.AprilGaede.com into your web browser's address bar.  I love their stingingly truthful exposes on this woman.  After reading their mind-blowing blog entries, I am wholly convinced that April is solely guilty of bringing negative attention to her own family. 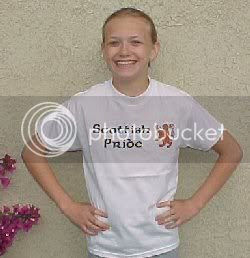 Here is yet another photograph of Lamb as she stood in the backyard of the Bakersfield house that once belonged to her mother's lover and posed in a tee shirt that read the words 'Scottish Pride'.  This picture was taken during much happier times as evidenced by her infectious smile and spunky-looking pose.  However, the twins have been weeping more than ever since the televised interview on the ABC network.  Read all about it here.

This letter was written by a fourteen-year-old girl who first encountered Lamb and Lynx when they had just moved to Bakersfield over two years ago. I have also copied and pasted it to this blog for your convenience.

I know Lynx and Lamb. I was at the [NAME REDACTED] mall one day with my BFFs Kirsten and Jess and wer were just standing by Claire's waiting for Jess's ear to stop bleeding becuz she got another hole peirced (she has 14 holes in her left ear!) and this blond girl came up to us and asked us who we were. It was wierd becuz we didn't know her and she wanted top know who we were. So we told her and she told us her name was Lynx. And honestly I didn't laff. Honestly. But Kirsten kind of did. (Jess couldn't cuz she was kind of crying.) And she got a little mad but whatever. So she asked us if we went to school and we told her we did. She said she was homeschooled and Kirsten kind of laffed more becuz obvs homeschooled kids are total freakes. I just stood there and didnt do anything really. Oh, Lynx looked like a milkmaid. It was wierd. Anyway she said she was new in Bakersfield and she was looking for freinds which was wired becuz you don't really look for freinds, you just mnake them, you know? Anyway so that was wreid. (And Jess's ear was really bleeding at this point. She went ot the bathroom I think.) BUt we we like whatever. So we just staired at each other for awhile. Then another Lynx walked up to us but she said her name was Lamb. At this point Kirsten completly lost it and ran away. So I was standing there by myself with these two girls who looked like milkmaids looking at me with thier creepy blue eyes. TOTALLY creepy. IT was so deirw. Lamb said I was pretty and they were new in Bakersfield and they were just in the mall and whatever. She seemed more normal even tho her name was Lamb. Then Lynx was like I told them that already and got all crazy. I was like Lynx is TOTALLY the cunty one becuz with twins theres always a nice one and always a cunty one. I didnt' say that but that's what I thought,. Then Lynx asked me if had any black freinds. So I said yes becuz I'm totally in the drama club with An'gell. So Lynx spat on me and Lamb kicked me in the shin and they walked away. And I was just standing there. Kirsten wasn't around and JEss was still iun the bathroom. THEN, they turned around and called me n-lover, if you know what I mean. I can't write it becuz it's too awful. So I screamed milkmaid ho's at them, but they just walked away. So thats how I knew they were little racist bitches. I'm glad I know becuz if I ever see them again or in concert, I'll totally throw crap at them. Like bottles or something.

Is Lamb Gaede's Heart Fully Into The 'Racialist' Movement?

I just finished reading a recent interview with Prussian Blue on www.SomethingAwful.com that was, in my humble opinion, truthfully amazing. The author of the article provides plenty of hints that Lamb's heart may not be fully intertwined into the so-called 'racialism' movement. In addition, the author wrote about some noticeable discord between the non-identical twins. Thanks to Janice for providing the link to this interview.

This link will direct you to the recent 'Sun' article on Prussian Blue and their family. Read, absorb, and enjoy!