"Tucker Max" Discussion on the Twins

Thanks to Yama The Space Fish for shedding light on the Tucker Max message board and their splendid discussion on our favorite twins. Click here to browse through the comments if you think you will have fifteen to twenty minutes of uninterrupted spare time for reading. Good night!

Thanks to 'Yo-Yo' for being thoughtful enough to bring the Wikipedia.com article on Prussian Blue to my attention. It was slated for deletion a few days ago; however, the article is staying for now. 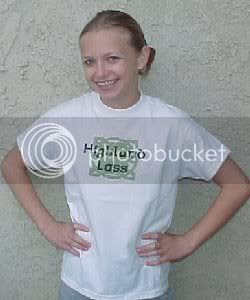 This is, in my honest opinion, a self-explanatory photograph.  A picture 'speaks a thousand words', so there's really no point in composing a lengthy blog entry about this image of Lamb.  She is standing in her backyard as she poses in this latest tee shirt.

Make sure you have at least twenty to thirty minutes of expendable time before you click on this link to read the comments section of Carolyn's older blog entry. After all, there are numerous comments that might pique your interest. Carolyn Castiglia, a New York City blogger, mentioned Prussian Blue in a negative light after reading the Bust Magazine article. She probably felt the classic neo-Nazi wrath soon after composing that blog entry.

From The 'Movement Exposed' Blog

Click here to read the latest news concerning April, Lynx, and Lamb. The proprietor of the other blog wrote another splendidly informative blog entry on Prussian Blue and everything that has happened since they appeared on the ABC network. Stay tuned.

Thanks to Andrew, one of our readers, for bringing this new site to our attention. Click here for another Prussian Blue site if you just want to have a laugh or 'pass the breeze'. Cheers!

Fashions For European Americans, Part I 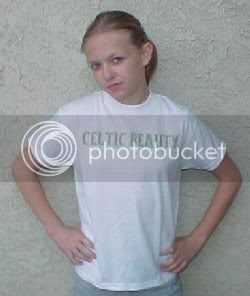 Here is the supreme 'Celtic Beauty', also known as Lamb.  She is striking a pose for the camera in a tee shirt that is designed for people of Celtic extraction to supposedly 'take pride' in their ethnicity.  Actually, these shirts were on sale at Prussian Blue's official website until recently.  I am not sure if they're still on sale, though.  If I am recalling correctly, the twins were selling them at the steep rate of twelve American dollars per tee shirt.  Stay tuned, because I intend to display more fashions in the near future.

If You Have Plenty Of Time...

If you have plenty of time on your hands, I suggest you read this lengthy discussion.  Prussian Blue's mother and her live-in lover, 'Mark Neufeldt', are very prominent in this conversation and you will learn more about the Gaede family.  In addition, several members of the 'white nationalist' community engaged in excessive trash-talking and the thread was consequently closed.  The racists don't interject into the conversation until several days after its inception, so read and enjoy.

Above: Check out April Gaede's 'camel-toe' by looking at the crotch.

I warmly extend my thanks to 'Yo-Yo' for unearthing the following article.

Sweet valley hate
In case you missed this story from Friday, Oct. 20, it's one of those pieces that really bear repeating.

ABC unearthed and interviewed 13-year-old twin white supremacist singing sensations Lamb and Lynx Gaede, whose musical act is called "Prussian Blue." According to ABC, they are about to release their second album and have made one music video.

ABC seemed really taken by the comparison of the Gaede ladies to the Olsen twins (Mary-Hate and Ashley?), but we were actually a lot more taken with the Gaedes themselves, who -- all those anxious to blame all our problems on the South, take note -- live in the true blue state of California. According to ABC, the twins are home-schooled, though that may be a recent development. According to their Web site, both Gaedes were on last year's Principal's List for their high grades; Lynx was nominated for "7th Grade Princess," and Lamb, somewhat horrifyingly, won a history award. Their father displays swastikas on his belt buckle and pickup truck, and as his cattle brand. Their mother, April, explained the swastika thing as "a symbol of freedom of speech." Fair enough.

We were curious about who the hell was writing their music, especially "Sacrifice," about Nazi Rudolf Hess, describing him as a "man of peace who wouldn't give up."

Their Web site credits "Sacrifice" to Lamb, though many of their tunes are written by other people. The site also turns up some breathless excitement about the upcoming release of their single, "The Stranger," a "musical adaptation of a Rudyard Kipling poem" that is "causing quite a stir on the racialist" -- is that what they're calling it these days! -- "music scene and has the potential to cross over into the mainstream." Good luck with that.

The lyrics to all of Prussian Blue's songs are listed in full. Our personal favorite was "Weiss! Weiss! Weiss!" though probably it was our favorite because it was in German and we couldn't understand what it meant (though we get the idea). This sample of Prussian Blue's music includes the line "This song was not written to entertain," which is a good thing. Because it's really awful.

"Aryan Man Awake," penned by Lamb and Mama April, may be the scariest of the girls' songs, complaining as it does of a world "where freedom exists for only those with darker skin." According to ABC's story, the Gaede sisters raised money for Hurricane Katrina victims, which was distributed by a white supremacist organization that made sure that only freedom-disadvantaged white New Orleanians received aid.

I wonder if, when Lamb and Lynx are belting out "Aryan Man Awake," they ever really hear the lyric from the song's second verse, which asks, "Can you see how they lie to warp your daughter's mind?"

Dedicated To The 'Cause'

Here's a memorable picture of Prussian Blue's mother, April Gaede, as she distributes racist literature to any white persons who appear curious and receptive enough.  This woman is really dedicated to the so-called 'white nationalism' cause.  Bystanders have been known to throw objects at her as she proudly waved her anti-immigration signs into the foggy Bakersfield skies.  She has been called names such as 'bitch' and 'stupid white woman' by non-white people, but has continued on with her efforts.  Other so-called 'white nationalists' have referred to her as a 'whore', but April remains undaunted.  She believes her efforts will someday be fruitful; however, most enlightened people know the truth.

Are You New To This Site?

Most of you are probably discovering this site for the very first time after viewing the recent television program that featured Lamb and Lynx, the thirteen year-old blondes of Prussian Blue. If you're seeking information about the girls and their freaky stage mother, please feel free to comb through the archives that are conveniently located on the lower left-hand side of this page.

I think it is really sad that people are so ignorant about race. You must have all forgotten that we are all part of a bigger race the human race. The only explanation I can give for this is ignorance, and un-educated people. These two girls for example are so brainwashed, and being home schooled, they will have no social skills for their future. What happens one day when they want to go to college, and the professors are black, or the person they want to get a job from is black. You all need a bit of reality, this country is very diverse. O and by the way, whites were not the first ones in America, so I suggest you teach your children compassion for all humans, cause you will never see a country that is all whites, unless you all take all of your people and go find some empty island cut off from the rest of the human race. With all the hate going on in the world today why would you want to perpetuate that by instilling these ridiculous ideas into your children. Hopefully one day they will be able to think for themselves, and hopefully have a chance at a normal life.

what are you fucking kidding me i hate your band, what is wrong with you, you people are morally wrong, its sad to see racism at a young age, you will regret it when you are older, im sure you will even marry a black man, we are all people, hitler also killed white people pretty much all the people he killed were white, so shouldnt you hate yourself too? white people arent all that good either, havnt you heard of trailor trash? you know those lazy low life losers who live in little trailers drinking beer all day and beating their wife and kids? is that what you think is right? america has been racist to just about every race, shouldnt be the ones racist to you instead? keep these words in mind on your next kkk meeting

Click here for some more Gaede family information. I am sure that this is old news for many of you; however, it doesn't hurt to put this information out there again. Stay tuned.