A New Place To Live

According to a moderator on this site, Prussian Blue is currently looking for a new place to live. Here's what the moderator has to say.

Prussian Blue are currently on the road, scouting out new places to live, to get away from the mud invasion that is taking place in their current hometown near Bakersfield, CA
At this time, they are most interested in the pacific northwest area, they are looking for a town that is at least 90% white.

The Pacific Northwest includes the U.S. states of Washington, Oregon, Montana, and Idaho. In addition, it includes the Canadian province of British Columbia. Out of all the options, Idaho would obviously appear to be the most appropriate place.

A few days ago the Nevada-area members of National Vanguard gave the Secretary of State of Nevada the paperwork needed to form the White People's Party. The long-term intentions of National Vanguard are to create political power for white people and realize their goals of 'white living spaces'.

Since the Gaede family is currently seeking to relocate to an area populated with more white people, they might consider moving to Northern Nevada to become an integral part of this new political party. The land is cheap and the weather is sunny three-hundred days out of every year. If things turn out really well, one or both of the twins will meet men with suitable genes and 'Aryan ideals' for the purpose of reproduction within a few short years.

National Vanguard is currently boycotting The Home Depot stores after allegations that the company funds "day labor centers" that enable the hiring of illegal Mexican immigrants.  The above picture displays a mixture of California-area National Vanguard members and a handful of folks from SaveOurState.org as they protest in front of a Home Depot store in Santa Clarita, California.  Thanks to April Gaede's boyfriend, Mark H., for writing an informative article.

Santa Clarita was a highly strategic location to select for a protest of this nature.  It is a newer, rapidly-growing city located in northern Los Angeles county.  The city was first incorporated in 1987 and is filled with newer suburban homes and high-quality shopping centers along a vast expanse of mountains.  Santa Clarita's racial makeup is approximately eighty percent Caucasian and twenty percent non-white Hispanic, with a trivially negligible population of other races.  On the interstate 5 freeway I drive past the Santa Clarita Valley districts of Castaic, Valencia, Newhall, and Stevenson Ranch on a daily basis.  This city is seventy miles south of Bakersfield, Prussian Blue's rapidly-growing city of residence.

Here is a recent comparison involving Prussian Blue and another pre-teen musical duo called Smoosh.  Read on and enjoy. 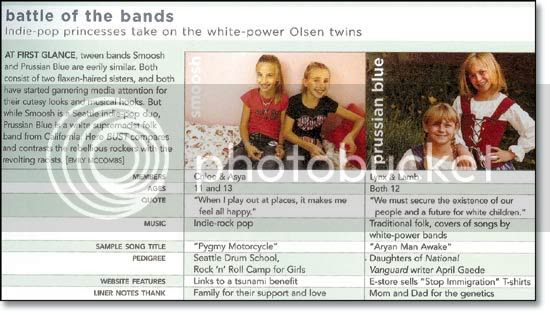 To Set The Record Straight...

Here is a post made by someone who uses the moniker of 'Prussian Blue Fan'. He is accepting responsibility for creating the new Prussian Blue forum.

Hello people:
After reading your posts, I just wanted to stop in, and set the record straight. First off, I absolutely love Prussian Blue, and have no idea whatsoever why the official forum is down, my guess would be that is has nothing at all to do with "hacking"

I did create that other forum, on my own, and Yamamanama had nothing to do with it, nor do I know or associate with that man. As far as whether or not the forum is "legitimate", let me say that I have never met Prussian Blue, or their mother, and have never seen them live, so I am not in any way associated with them, other than being a fan. The forum is legitimate in the sense that it exists, if you are wondering why it is modeled so closely after the official forum, there are two reasons for that.

1) out of respect for the official forum, Elvis Presley used to say imitation is the sincerest form of flattery.
2) To provide a comfortable and familiar environment for Prussian Blue junkies like me to hang out at, while they get the problems ironed out at the official site, and perhaps beyond.

The problem so far has been the antis tried to turn it into a parody site, and the wn's were too paranoid about the forums origins to post there. Actually I thought the posts there were funny, although I lean towards the wn side. Obviously the original poster there "april" is not april gaede, so it is a misrepresentation to label her the author of that "extremely warm post"

Well anyways, anyone is invited to post there, it was not put there to "bait" anyone, and there is no conspiracy going on, and I am willing to "turn over the keys" so to speak, and provide moderator accounts to the original moderators of the official forum if they are interested in doing that while the other site is down. Sorry for all the confusion, hope this clears everyone up, take care...

A brand new Prussian Blue forum has been created.
Take a look at the extremely warm post recently made by Prussian Blue's mother, April (pictured).

Juicy Juice For You All

Someone sent an informative e-mail with a link to some of the juiciest juice I've encountered in weeks.  I will not post the link on this blog because certain persons in the so-called WN movement are divulging painfully personal information about the Gaede klan.  As some of you know, an internal battle is being waged by Resistance Records against April Gaede and her prized vaginal fruits (Lamb, Lynx, and Dresden).  I will post a few of the caustic insults that were unflatteringly hurled at the Gaedes.

Posted by Glenn: "This was actually quite a good blog until the bickering between members of various rival racialist factions appeared.  Do you people see now why 'the movement' is a joke that is getting nowhere?  You call yourselves racialists but you act no different from the blacks you claim to hold in such contempt.  You are a joke, the lot of you."

Posted by Activist: "There are many dysfunctional people in the White Nationalist community.  April Gaede is a prime example.  April just can't understand that when she lives in a glass house, she better not throw stones."

Posted by Chris Williams: "If you want to research the facts about Gaede, go to www.vnnforum.com and look up all posts by 'White Will'.  He was one of the many unfortunate suckers to be sexually manipulated by this whore.  Trust me, the entire pro-White movement hates this stupid slut.  She makes us all look stupid as soon as she opens her mouth."

Also posted by Chris Williams:  "Every bit of truth about April Gaede can be found on www.resistance.com/forum under 'Movement Frauds Exposed'.  There, you will find the truth about this slut and see pictures of her ugly, lying hypocritical self.  She is worse than gross, she is a waste of good White Aryan skin."

Posted by Kevin Winston:  "WHAT?!!  April Gaede is a disgrace to the entire White race!  The entire pro-White movement wants her to disappear back into the cow pasture in which she came from.  SHe is nothing but an over-aged, starved for attention, promiscuous movement groupie that will sleep with any guy that can bring her and her girls attention.  She parades around like she is some wholesome example of Aryan motherhood, when that is the exact opposite of what she is.  She was engaged to three different men in one year alone and one of them was an admitted race-traitor named Steve Sims.  She refuses to marry her boyfriend Mark because he is 'too short' and not a pro-White leader.  There is nothing virtuous about this girl at all, unless of course you think that sleeping with multitudes of men so that they will pay your bills and bring you attention is virtuous.  Make no mistake people, April Gaede is an embarrasment to the White Race and the entire world would be much better off without her."

Day Of The Rope

You can thank Mansa Musa, a prolific MootStormfront.org moderator, for bestowing the idea of this post upon me.  Since Prussian Blue has released a song entitled 'Victory Day', I shall explain that the so-called Victory Day is synonymous with the WN "Day of the Rope".

The "Day of the Rope", Mansa Musa explained, is the day when the WNs seek vengeance on all the race traitors in the midst of their new "white nation".  The "Day of the Rope" will involve the savagely mass slayings of "whiggers, muds, and race-mixers".  Doesn't the violent ending seem too apocalyptic?

Here's a sample of the lyrics of 'Victory Day':
Well, sit down and listen
To what I have to say
Soon will come a great war,
A bloody but holy day.
And after that purging
Our people will be free. 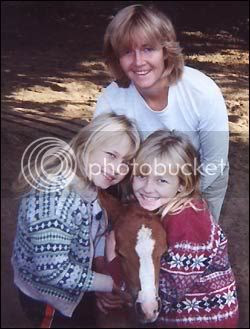 It's time for a quick flashback.  Here's an older picture of the Gaede klan as they provide love and companionship to a four-legged resident of their grandfather's Fresno County, California ranch.  Lynx is the twin who is wearing the blue and white sweater.  After all, no picture really is too old to post (especially one of Prussian Blue).