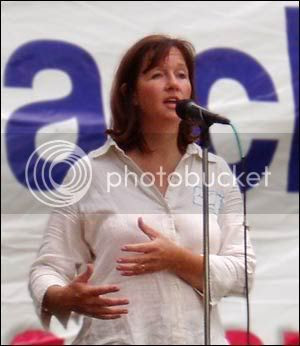 Here is a recent picture of Prussian Blue's "racially-aware" mother, April Gaede.  For your information, she is wholeheartedly speaking to a crowd of other "racially-aware" white people in the state of Florida.  I am actually enjoying her new look.  Her auburn hair color has been replaced with a luscious-looking dark brown hue; additionally, she conservatively applied cosmetics to her face.  Not bad for a thirty-nine year-old "white nationalist" woman!

Another dear reader informed me of the existence of a newer pro-Prussian Blue site. You may read up on Prussian Blue at this other website; however, it's not nearly as informative as the Prussian Blue Sucks blog. The "white racialist" world should feel much pride toward Lynx and Lamb. The "white nationalist" world can expect a second Prussian Blue album that will be sure to sweep the "movement" like the 2004 tsunami. Why in the hell did I mention the damned tsunami? That's quite self-explanatory.

On Tour
Posted by: amethyst23.
A dear reader informed me of Prussian Blue's most recent performances. (S)he wrote, "On Sunday, they performed 4 songs, a CBS news crew was there filming them, the audience was told a national news story would be done about Prussian Blue, with about 7 million viewers expected to be watching the national news at a later date."